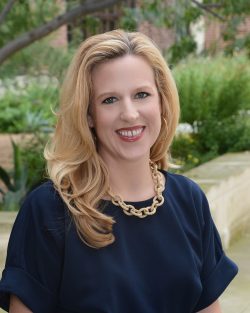 Tobi Young, a 2003 graduate of the University of Mississippi School of Law and an adjunct professor, has been selected as a U.S. Supreme Court clerk for Justice Neil Gorsuch.

“The law school is so excited for Tobi, who has been an excellent professor and mentor to our students,” said Susan Duncan, UM law dean. “She has had an incredible career thus far, and we know she will be excellent in this position.”

Young first met Justice Gorsuch while working at the Department of Justice. He helped oversee the Civil Rights Division, where Young worked initially as a trial lawyer and then as counsel to the Assistant Attorney General. Gorsuch later recommended her as a clerk to Judge Jerome A. Holmes of the U.S. Court of Appeals for the Tenth Circuit.

Gorsuch also was appointed to the Tenth Circuit in 2006.

“After my clerkship, my husband and I kept in touch with then-Judge Gorsuch during his 10 years on the bench,” Young said. “He would occasionally send us articles he wrote, and when we visited Denver, he always made time to join us for lunch or visit with us in his chambers. When I learned he was going to be announced as the next Supreme Court nominee, I joined a few former colleagues and traveled to D.C. to assist with his confirmation.”

Young recalls Justice Gorsuch’s confirmation process as both exhilarating and exhausting. “We worked around the clock for nearly three months. I was fortunate enough to be at the White House when he was announced as the nominee by President Trump, and it was such an inspiring moment watching a mentor accept the nomination with such humility and humor.”

It’s common for newer justices to bring in former clerks and colleagues in their first few years on the Supreme Court. Gorsuch asked Young if she was interested in clerking for him, an idea that she hadn’t even considered.

But, as Young put it, “How can you turn down an opportunity to clerk at the Supreme Court? It’s not a prospect I had ever pursued, but it was such an honor for him to have placed his trust in me. I’m excited to work for him, and lucky to have an amazing support system that enables me to be a mother and take this position.”

Young’s husband, Evan, who also is an adjunct professor at the Ole Miss law school and a partner at Baker Botts L.L.P., clerked for Justice Antonin Scalia during the 2004-05 term.

“Evan still frequently refers to his experiences at the Court and with Justice Scalia, who also had a great affinity for Mississippi. Being Justice Scalia’s clerk transformed his life and the way he approaches the practice of law,” she said. “If he is still buzzing about his clerkship, there must be something magical to that experience.”

“I am extremely grateful to President and Mrs. Bush for their example and for having given me the opportunity to work for and with them for over a decade. Having practiced law in both the government and the private sector, I have experienced the profession as more than a theoretical puzzle. I hope this real-world experience will help me serve Justice Gorsuch well,” Young said.

Young excelled during her time at Ole Miss and was even asked to give the Commencement speech for the 2016 School of Law graduation.

“I truly enjoyed my time at Ole Miss, and appreciate the support that has continued,” she said. “My professors taught me the fundamentals of the law, while also consistently emphasizing the importance of upholding the ethical expectations of our field – an area lawyers can never underscore enough. That’s a topic that Evan and I focus on with our Ole Miss students.”

This spring, Young and her husband are teaching a class together entitled “Uncle Sam Wants You?” Their course focuses on the opportunities for and ethical responsibilities of lawyers who work at any level of government. As professors, they feel that not only teaching the curriculum, but also being a mentor to their students, is vital.

“We could not have been more impressed with the engagement level and the intellectual curiosity of this class,” she said. “We hope to continue being involved with the law school for many years to come.”