The award is the organization’s highest honor for law students, and recognizes individuals who have demonstrated leadership at their institutions and in their communities, specifically for LGBTQ+ equality.

“As a first-generation, gay, Mexican-American, my passion for equality and social justice stems from my childhood, where I worked as a child laborer during harvest seasons in Michigan, and from my experiences growing up as a person of color in Michigan and North Carolina,” Cazares said. 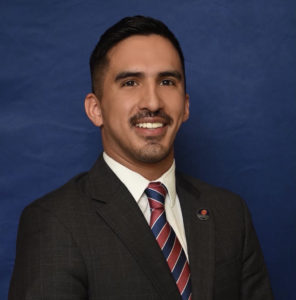 “As a result, I was able to personally experience the harm social, economic, and academic inequality can cause in people’s lives.”

Cazares, originally from Holland, Michigan, was very active during his three years at UM Law. He served as vice-president of the Ole Miss OUTLaw chapter, an organization dedicated to the pursuit of equal rights for the LGBTQ+ community within the school and in society. The organization provides support and a place for discussion of issues affecting LGBTQ+ individuals, and provides a sense of community.

Cazares also served as 2020-21 vice-chair for the National Latina/o Law Student Association, staff editor of the Mississippi Sports Law Review, and as a student clinician for the Mississippi Innocence Project. In 2018, he became the first Mexican-American senator elected to the UM Law Student Bar Association.

“I am so proud he has been recognized for his role as a leader. Julio Cazares is an emblem of the Greek word philotimo,” said Christiana Paissios, a current third-year law student and former president of the UM Law chapter of the LLSA. “He is diligent, hardworking, generous, and a wonderful advocate for his community. Julio exemplifies honorable service to others. I count myself blessed to know him, for the impact he had on my life and how he helped shape my experience as a law student. Julio is limitless and his successes well deserved, for they will positively impact the world around him.”

His personal experiences shaped and inspired his own advocacy to ensure more opportunities are available for underrepresented people.

Cazares took two courses under Assistant Professor of Law Yvette Butler: Civil Rights and Gender and the Law. She immediately noticed his passion for social justice.

“He thinks deeply about the issues on an academic level, but also puts in the time to learn from attorneys and advocates on practical issues,” Butler said. “Julio familiarized himself with the application of civil rights laws to LGBTQ+ equity issues in Civil and Political Rights when he completed a paper on the discrimination against transgender athletes in sports.”

His research led to his publication of an opinion column in the Clarion Ledger earlier this year on a bill banning transwomen from competing in women’s sports.

“I was very impressed by his initiative and ability to write such an accessible piece,” Butler said. “Legal advocacy comes in many forms and solid advocacy that is accessible to the public is vital. I have no doubt that Julio will go on to be an excellent attorney and social justice advocate, whatever form that may take.”

Cazares also earned the 2021 John Robin Bradley award for his commitment to social justice, which is an award selected each year by the UM Law faculty.

“Julio is so deserving of this award. While in law school, he was a committed student leader, an advocate for those in need, and, in the classroom, keenly insightful about matters concerning systemic failures within our judicial and financial systems,” said Antonia Eliason, associate professor of law. “His focus on combatting inequity and injustice wherever it may be found came through both inside and outside the classroom.”

He continues to serve as a vocal advocate for underrepresented communities. Cazares now works for the U.S. Department of Labor in Fort Wright, Kentucky as an employee benefits security administration investigator for the midwest.

“I couldn’t have done all this without the support of the law school community, and I hope it serves as a reminder to everyone in the legal profession and the ABA that LGBTQ+ student leaders come from everywhere, including Mississippi.”