CURRENT TELECOMMUNICATIONS ISSUES AND THEIR IMPACT ON SPORTS BROADCASTING

In the past twenty years, significant technological advances have challenged the traditional broadcast television business model. The proliferation of digital video recorders and online-video companies continues to threaten the current pay-TV model adopted by cable and satellite television providers.  Sports broadcasting, however, seems to be the exception. Unlike the majority of cable programs, television viewers prefer to watch sporting events live.

Several recent developments demonstrate the shifting landscape of broadcast television. In 2013, John McCain introduced legislation that would encourage “a la carte” pay television, where customers would have the freedom to purchase specific channels rather than being forced to purchase bundled cable packages.  Cable giants Comcast and Time Warner will be merging, subject to federal approval. This past June, the Supreme Court ruled that an online-video service company violated U.S. copyright laws when it retransmitted major television networks’ signals. Finally, professional sports leagues, professional sports organizations, major college athletics conferences, and even the University of Texas have created entity specific television networks.

The future of sports broadcasts thus lies at the intersection of law, business, and the regulatory frameworks within the NCAA and the professional sports leagues. At the confluence of these areas lie a number of fundamental questions.  Can the traditional broadcast model survive? How does copyright law provide an opportunity or an obstacle for alternative delivery methods? What role does / should federal telecommunications law play in shaping the broadcast of sports? What antitrust concerns inform the shifting landscape? To what extent does the current model impede or enhance the success of sports on television?

KRISTI DOSH is a professional writer, sports business analyst, attorney, and accomplished author. Dosh has provided expert sports law and business opinions on an expansive list of issues for ESPN, Forbes, Bleacher Report, Outkick the Coverage on FoxSports.com, and Campus Insiders, among others.  She also authored Saturday Millionaires: How Winning Football Builds Winning Colleges (Wiley/Turner Publishing 2013), a book that explores the business of college football.  Dosh is a nationally recognized reporter and analyst on the business of college sports.  She was a practicing attorney before becoming a full-time sports law and business expert, graduating from the University of Florida, Levin College of Law.

ROBERT FRIEDEN is Pioneers Chair and Professor of Telecommunications and Law at Pennsylvania State University.  Frieden has published over fifty articles in academic journals, and updates a major communications treatise: All About Cable and Broadband (Law Journal Press).  In addition to his impressive academic experience, Frieden has participated in numerous speaking engagements, served as a consultant, held senior policymaking positions, and practiced law all as a telecommunications specialist.  Frieden received his Juris Doctor from the University of Virginia.

TERENCE HIGH is an attorney based in Jackson, MS.  High practiced at Mitchell, McNutt & Sams and Baker Donelson before becoming the sole proprietor of The High Law Firm, PLLC.  He has participated in various speaking engagements as a sports law expert.  High was a scholarship football student-athlete at Mississippi State University before he received his Master in Accountancy from The University of Mississippi and his Juris Doctor from Capital University Law School.  High is also a certified NFL contract advisor.

CHARLIE HUSSEY is the Southeastern Conference Associate Commissioner for Network Relations. In this role, Hussey serves as the league’s primary contact for all matters pertaining to the new SEC Network and serves as a liaison with ESPN for all television, digital, and sponsorship issues. Hussey grew up in Oxford, MS and received his B.B.A. from Ole Miss and his M.B.A. from the University of Alabama-Birmingham. 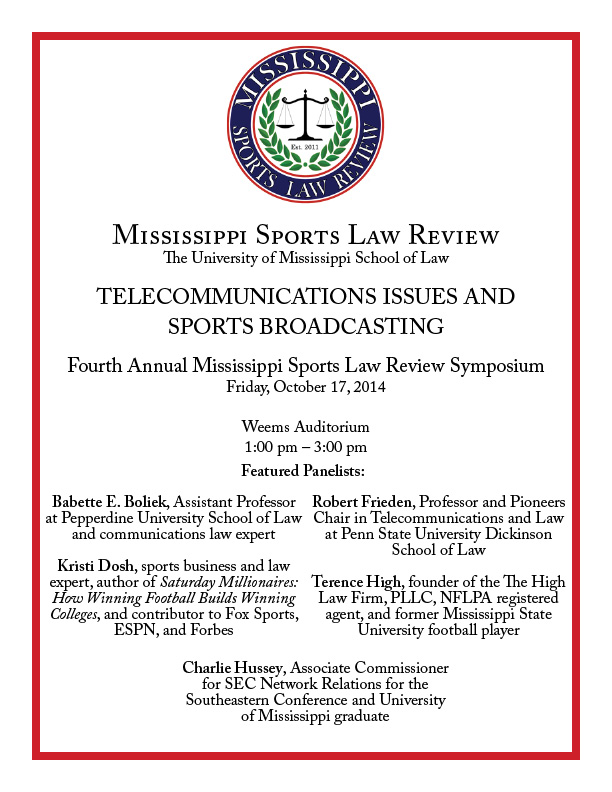 The panelists, MSLR Executive Board and Faculty Advisor Berry pause for a photo